Taking a Butcher’s at Beef and Birds 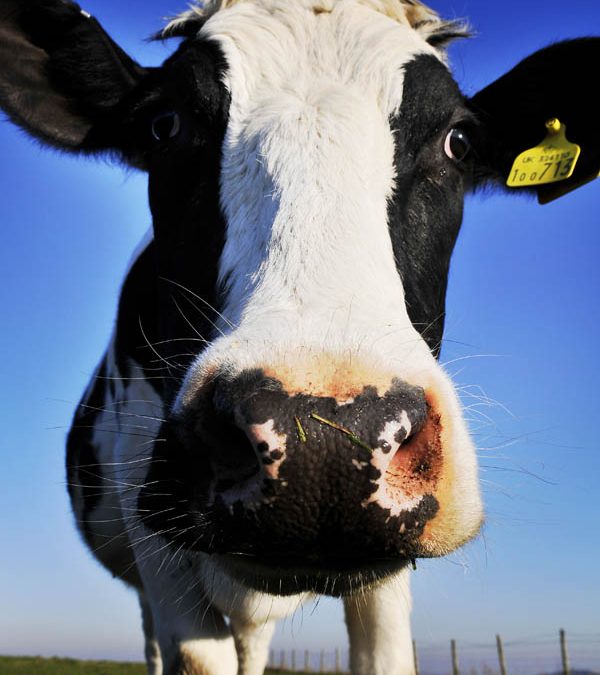 “People enjoy reading your Eastbrook farm blog” Holly said (she’s very good in the persuasion department) “so could you write another one for us?” Being easily flattered I innocently asked what she would like me to write about;- “birds and beef” she replied. So, rising to the challenge, here goes and a gold star to anyone who can spot the “butcher” link between birds and beef.

When you buy a piece of beef you may well be familiar with the typical beef breeds of cattle such as Aberdeen Angus or Hereford but beef from a Friesian dairy animal? No, I thought not.

The Eastbrook dairy herd at Cues farm in the village is made up almost entirely of British Friesian cows and although they are black and white like the Holstein cows which form the greater part of the UK milking herd, there the similarity ends. Holsteins are very good at producing milk (10,000 litres per year as an average) but that is achieved by feeding them a lot of concentrate feed. Friesians are better at producing milk from grass which is the cheapest feed you can give a dairy cow.

At Cues the British Friesians yield an average of 6500 litres per year and 65-70% of this yield comes from grass; either with the cows grazing during the spring and summer, or from conserved silage and hay during the winter. Additionally organic concentrate feed is blooming expensive (£380 per tonne) so there is an added incentive to produce milk from grass.

In order to produce milk a cow has to give birth to a calf each year and calving is in full swing at Cues right now. Typically a cow will be giving milk for 10 months once she has calved and will then have a 2 month “dry” period whilst she has a rest and regains her body condition in preparation for calving again. We run a “closed” herd, which means that all the dairy replacements are home-bred using artificial insemination with semen from proven British Friesian sires. This in itself creates a problem because, by the law of averages, 50% of the calves born will be male and you can’t milk them! It’s a sad fact that dairy-bred bull calves are often shot at birth because they are thought to have no economic use. You won’t be surprised to know that is not the case at Eastbrook.

The British Friesian has a much better body conformation than the Holsten and so all our male calves are reared to produce dairy-bred, grass-fed beef at around 27-30 months of age. True, the meat yield and carcass quality won’t be the same as a recognized beef breed but it still tastes pretty good (which you will already know if you have eaten at the Royal Oak) and it does away with the notion that you can’t produce beef from a dairy-bred animal, with the added bonus of producing beef from grass. To find out more about our dairy-bred good beef, take a look here.

The sale of Good Beef…

As well as coordinating the sales of organic pig meat from Eastbrook and several other organic pig producers the Eastbrook Farm Organic Meat business (EFOM for short) have turned their business acumen from pork to beef. As well as selling retail pack farm beef in the Royal Oak Hypermarket they have also developed a range of added-value products to include corned-beef and “Pink Beef” which is a slow-cooked topside joint that can be heated for a quick, delicious roast dinner or carved cold. As with pigs it is easy to sell the prime joints, the added value comes from utilizing the whole carcass by developing these alternative products and some skillful butchery.

Which, seamlessly, brings me to the link between beef, birds and butchers.  (Which hopefully  goes to show there is some thought into compiling this drivel).

A very rare sighting up on the Ridgeway a couple of weeks ago of a bird that was once widespread but is now virtually extinct as a breeding species in the UK. The Red-backed Shrike is also known as the “Butcher Bird” because of its’ habit of impaling its’ prey (typically small mammals, reptiles and insects) on the thorns of blackthorn and hawthorn to serve as a food larder. Only 1-3 pairs are thought to nest in the UK so most likely the visitor on the Ridgeway was a European bird heading down to either eastern or southern Africa for the winter.

Just goes to show that you can never be sure what you might see on a walk around Eastbrook so keep your eyes peeled! Do let us know of any unusual sightings, either via James (who looks after the photographic and safari side of the farm) or the sightings board in the Helen Browning’s farm shop.

Award yourself a gold star if you managed to spot the connection!