Strange title for a piece that’s supposed to be about the birds out and about on Eastbrook Farm isn’t it?  Bear with me and I hope all will be revealed.

When Claire asked me to write this I thought it would be easy, after all, I am out working on the farm every day; I don’t need to go looking for wildlife, I’m surrounded by it!  But then it struck me that this is an “inbetween” time (hence the title, come on, keep up!).

As I write this in mid-April it’s about 10 days since I last saw fieldfares and redwings around.  These Scandinavian thrushes come here to escape the colder winter weather in their homelands before returning there to breed as our Spring arrives.  They strip the hedgerows bare of all the hawthorn berries before flocking into the fields in search of worms and insects.  Talking of flocking, the huge swarms of starlings that we see, particularly in the pig fields over winter, have now dispersed to breed; many of these will be European birds taking advantage of our milder winters. (One pair hasn’t gone very far though, as they have chosen to nest in the wall right next to the farm office door). Likewise golden plovers are attracted to the muddy fields (and there was no shortage of mud this winter) but they have now moved North into the uplands where they nest.

So, as some birds leave us, others are just arriving. Higher up on the Downs the first wheatears are passing through.  These relatives of the robin (they are all part of the Chat family) are en-route from sub-Saharan Africa, heading for our northern uplands and moors to breed. The name is a corruption of the Old Norse white bottom (to be polite!) because the white feathers on its’ rump are very obvious as they fly away from you.  The first few swallows are also here, having made the long journey from southern Africa. They will be followed by the house-martins and swifts which in turn will be followed by the hobby. This small, very fast and maneuverable falcon, feeds on swallows and house-martins so you can appreciate it must be a pretty nimble flyer.  Look out for a scimitar-winged falcon, slightly smaller than our resident kestrel, which looks like a giant swift in flight. Later on into late summer you will find the hobby over lakes and ponds, catching dragonflies which it eats on the wing.

The first of the chiff-chaffs have arrived, along with the willow warblers and whilst their plumage is very similar making them difficult to tell apart, the songs are a giveaway;- the willow warbler has a rich, melodic song whilst the chiff-chaff says just that- “chiff-chaff”, and very monotonous it is too. Another, more readily identifiable, warbler arriving here from Europe is the blackcap. Recent studies have shown that more and more blackcaps are choosing to overwinter here, probably due to the increased amount of food being provided in gardens so they are able to survive our winters.

Of course it’s not all about arrivals and departures; most of our birds are resident and here all year round.

The rookeries in the ash trees around the farm have been active since late February/early March and the early-nesting rooks will now be sitting on eggs.  For most of the other birds the lengthening days and increased hours of sunlight are the trigger to pair up and start breeding. You may have witnessed the impressive display flights of both red kite and buzzard where the males of both species circle to great height and then stoop rapidly downwards with closed wings to try and impress the females, before soaring back upwards again.

In the garden you’ve probably heard the repetitive “teacher-teacher” song of the great tit as he proclaims his territory and early mornings and dusk are good times to listen out for the beautiful songs of the blackbird and song thrush. I have a pair of wrens nesting just outside my window and regularly hear the male belting out his song whilst I have my breakfast; a ridiculous volume of noise from such a small bird.

In this strange time of “lockdown” I hope that you can find time to appreciate the wildlife that is all around us, either in your own garden, or, if you’re local to Bishopstone, around Eastbrook Farm.

Finally, I had an unexpected visitor to my bird-feeders in the shape of this young buzzard. Not surprisingly all the small birds had disappeared but he wasn’t interested in them – he was hunting the bank voles which scurry around under the feeders eating the seeds which the birds drop. 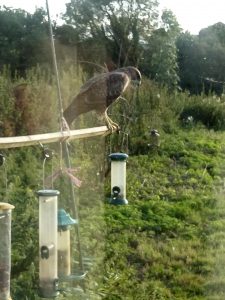 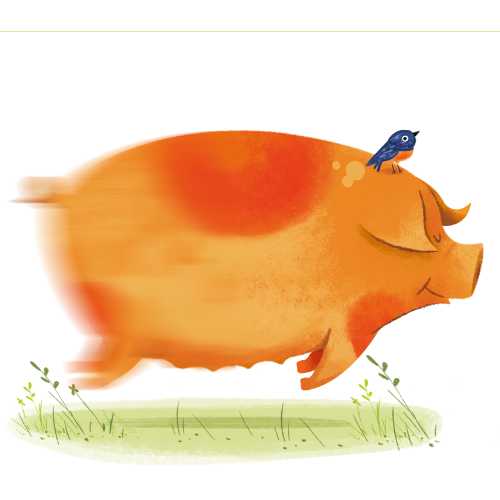